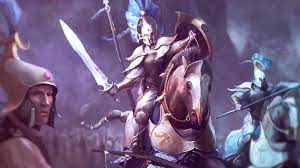 Escalation League-Return to the Realm-lords

This is a friendly escalation league, starting at 600 points (which is roughly the points total of a start collecting). The points will increase by 300pts every two weeks.

It will be an initial £20 buy-in which will cover your entry at the end Tournament.

We will be running a league system for this event, in the first week your opponents will be calculated from the three rounds you play and be set into a group table for you to go against. We determined this would be fair for new and experienced players alike.

Then every two weeks you will be given your matchup and have 2 weeks to submit the results of this outcome. This can be done in-store, at your house, or anywhere that can accommodate you.

If you don’t play in-store, please remember to submit your results to theteam@lvlupgaming.co.uk by the end of the second week, if you do play in-store please hand them to the staff member who will be onsite.

At the end of the 12-week run, we will hold a tournament instore at your final points limit of 2000pts.

Army lists will be required for the big Tournament, so hopefully, you’ll have enough practice to find your battle-hardened heroes.

Your weeks will run from the following:

First-day Tournament 600pts.
This will be a case of 600 pts or play what’s in the box. Army regiment, formations, and minimum force requirements will be ignored for this Tournament.

Army regiments and formations regarding minimum force will be ignored for this day as well but will be the last one, so please plan accordingly.

Your match-up results will need to be submitted by Sunday end of week Five.

Your matchup results will need to be submitted by Sunday end of week seven.

Your matchup results will need to be submitted by Sunday end of week nine.

Final week ten. Will be a friendly 4 round tournament held at Lvl Up.

Your Army roster will need to be submitted to the store a week before the event. It will be ITC ran and could be the chance for some of you to begin your journey into an even more glorious Age of Sigmar.

The rules pack and structure for the tournament will go live two weeks before the event.

The prizing will be scaling in attendance and will climax with you going head-to-head in your leagues for bragging rights and prizing. There will be the best sportsman award, the best-painted model. As well as! 1st place prizes for those in each league.

This event does not have a description.

What can I win?

No prizes have been listed

Register for the event